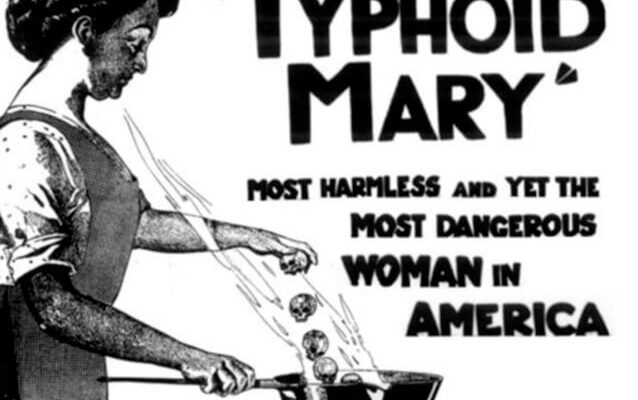 Did you know that you can be a carrier of a disease without showing signs or symptoms?

Here is a story about a famous carrier called Typhoid Mary who carried typhoid and killed the people she fed by practicing bad hand hygiene.

From 1900 to 1907, Mary Mallon worked as a cook in New York for several families. In 1906, she took a position in Oyster Bay, Long Island, within two weeks 10 of the 11 family members were hospitalized with typhoid. She changed jobs again, and similar occurrences happened in three more households.

She refused to believe that she could make people sick from her cooking because she was not showing signs of illness.

She was put into isolation and spent the rest of her life in quarantine at the Riverside Hospital. Six years before her death, she was paralyzed by a stroke. On November 11, 1938, she died of pneumonia at age 69. An autopsy found evidence of live typhoid bacteria in her gallbladder. Mallon’s body was cremated, and her ashes were buried at Saint Raymond’s Cemetery in the Bronx.

You should never prepare or handle food for the public if you think you are getting sick or have symptoms that include fever, vomiting, or diarrhea.

Practising proper hand hygiene is your best way to prevent the spread of diseases caused by foodborne illness.

At Canadian Food Safety Training we cover topics like this, click here for more examples of the topics we include in our training.

Watch this to see a short film about Mary Malone aka Typhoid Mary.