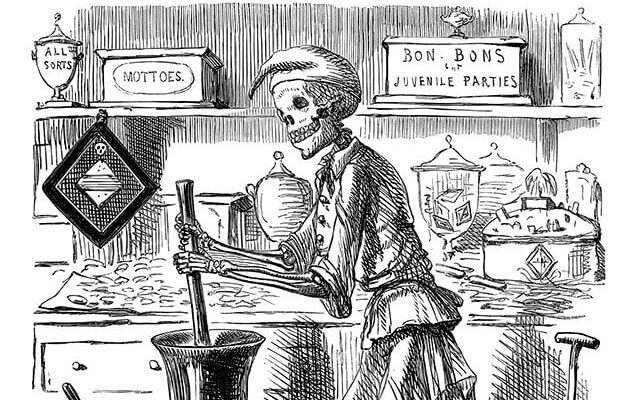 The origins of Food Safety has been evolving for a long time in an effort to protect the public from accidental poisoning. In 1858 over 200 people were afflicted with arsenic poisoning in Bradford, England. 20 people are estimated to have died from consuming peppermint humbugs.

It was reported that peppermint humbugs were sold to the public from a market stall. The accidental addition of arsenic to the sweets is reportedly because at the time sugar was extremely expensive and many people substituted it with something called ‘daft’ – a cheaper alternative with questionable ingredients.

Apparently, rather than using daft to make the sweets, they were made with arsenic which was mistakenly sold to the lolly maker from a local pharmacist. Read about the Pharmacy Act of 1868

Each lozenge contained enough to kill two people, and enough distributed in total to kill 2,000. The poisoned sweets were sold at the Green Market in Bradford and within a day or so, people began to get sick and sadly many died. Public outcry resulting from the awful food poisoning case helped contribute to the Pharmacy Act 1868 being implemented in the UK.

Here is some more information about the effects of arsenic in the diet.

Arsenic in the water