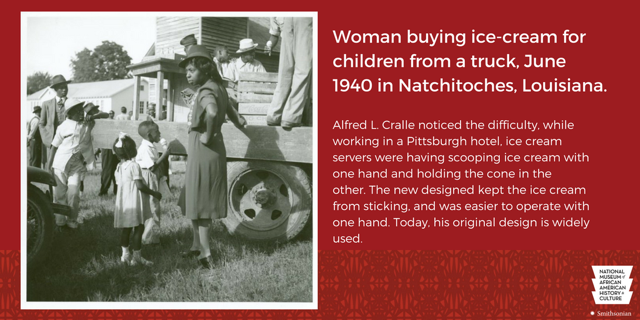 Inventor of the Ice Cream Scoop

Alfred L. Cralle was born in 1866 in Virgina, just after the end of the Civil War. As a result of his father’s profession as a carpenter, he developed an interest in mechanics. He is the inventor of the ice cream scoop.

The inventor later moved to Pittsburgh, Pennsylvania, where he found work. It was during this time that he developed a new invention: the ice cream scoop. He noticed that many of the servers were having difficulty trying to get the food from bins to customers’ cones. Ice cream stuck to everything it touched, so servers used two hands and at least two serving utensils to serve the product. Cralle had the idea to formulate a single serving utensil that the product did not stick to.

As a result, Cralle invented what he called the “Ice Cream Mold and Disher”. It was strong, durable, effective, inexpensive, and contained no delicate parts. The invention spread so quickly and widely that Cralle was never credited with his work. He never profited from this work.

Although Cralle never profited from his work on the modern ice cream scoop, he was a successful businessman in many other ways. Cralle eventually passed away in 1920. He had one surviving daughter, Anna Cralle, who passed in 2009 at the age of 98.